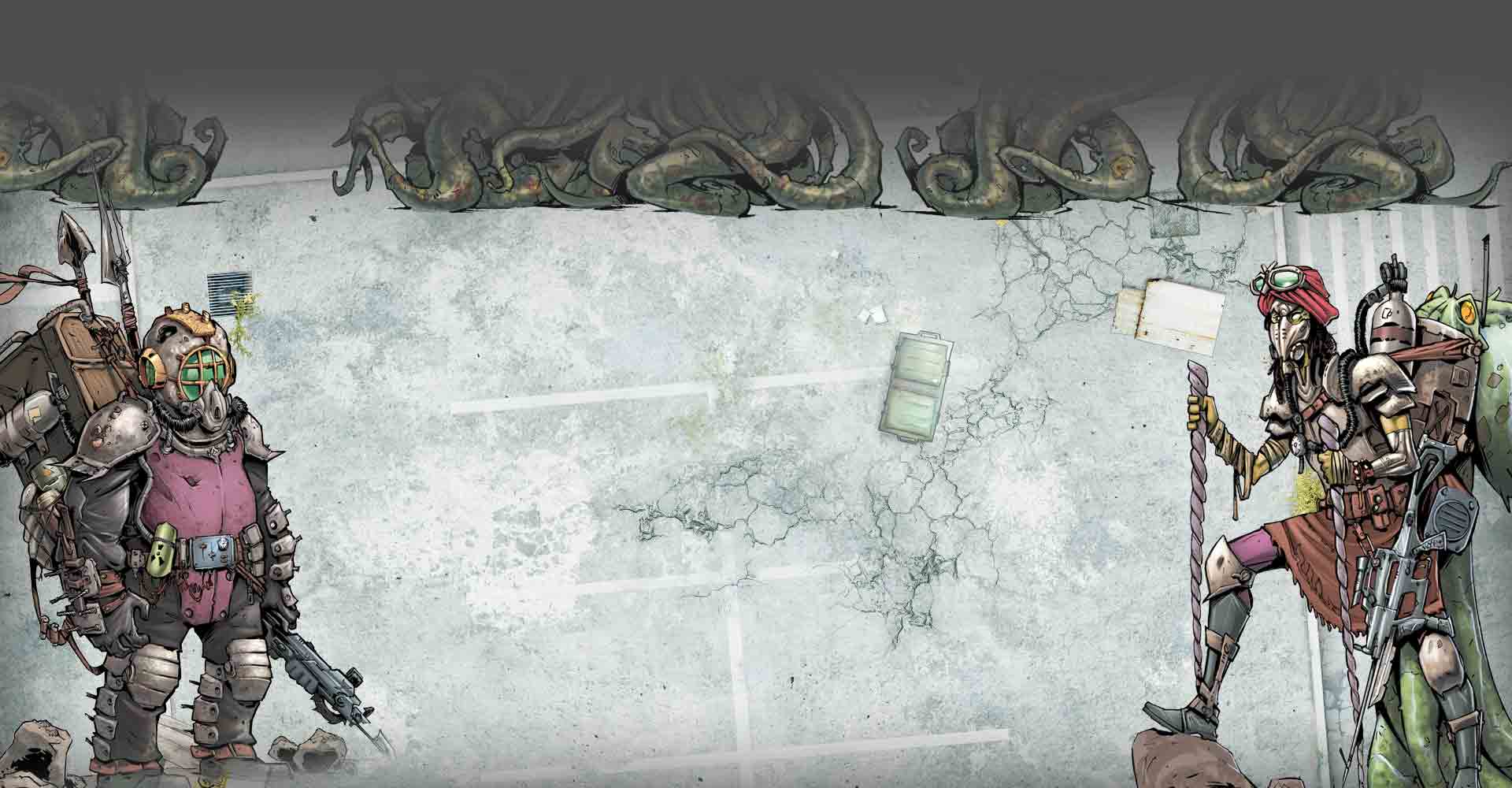 Eden is a skirmish game for two or more players involved in quick, tactical and violent clashes where everyone's mission is the focal point! Each player will decide his mission before the game and in turn the players will activate one by one their miniatures which will each have 3 action points to move, engage, shoot or perform actions related to their mission!

Eden is a game in constant evolution which has been developing for more than 9 years, mainly in Europe, and it's time for this game to spread in the English-speaking countries! 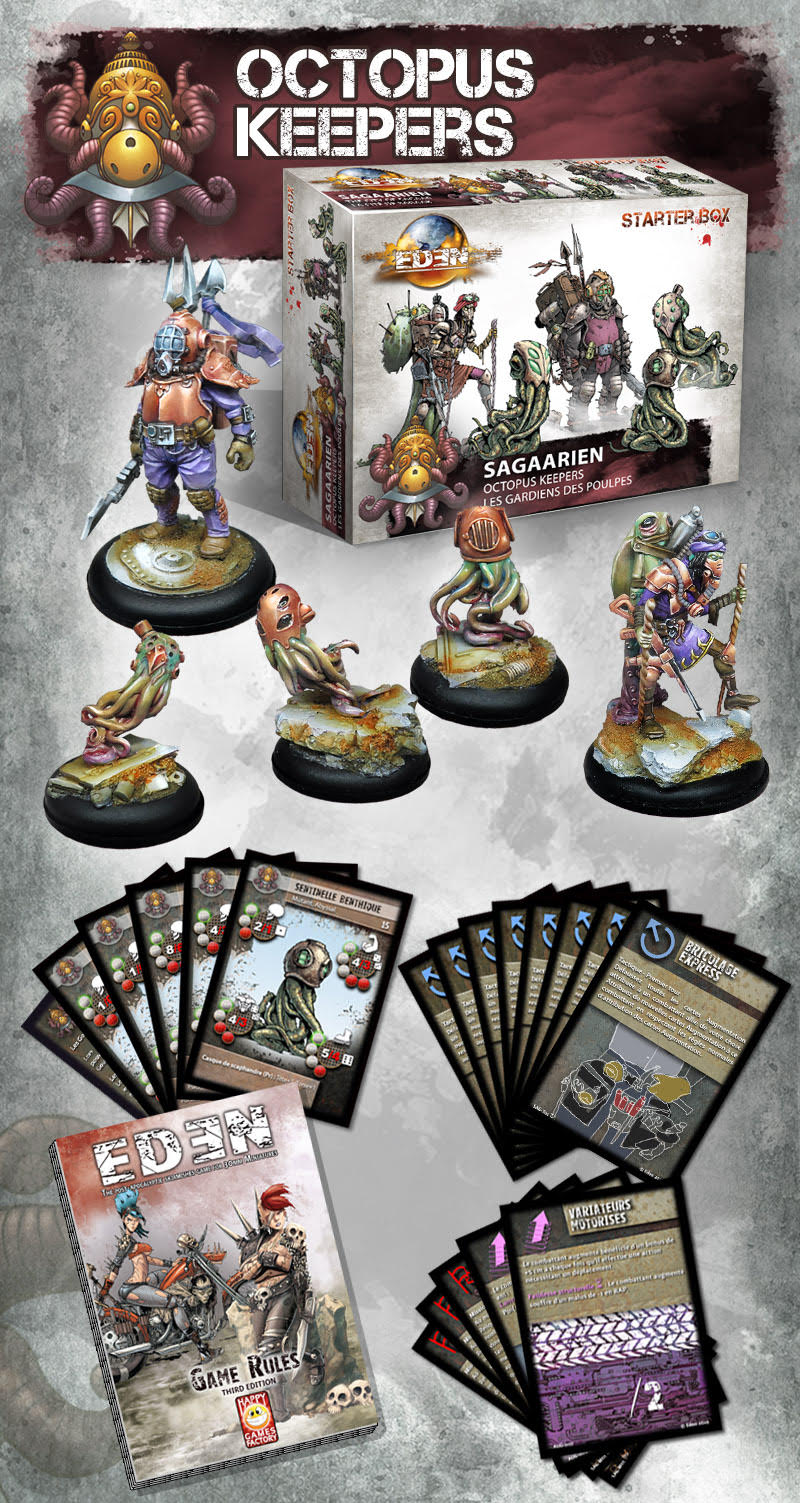 The Sagaarians represent the future of Eden. Indeed, this new faction combines the know-how developed over the past 9 years by the entire team and the entire Eden community, which helps us every day with its feedback and tests!

This pledge comes with all unlocked stretch goals.

With this new starter you can easily immerse yourself in the universe of Eden, with these 5 miniatures, their 5 profile cards, 3 mission cards and 8 tactical cards, you can play and replay without tiring. The complete rulebook is already included in the starter set too. 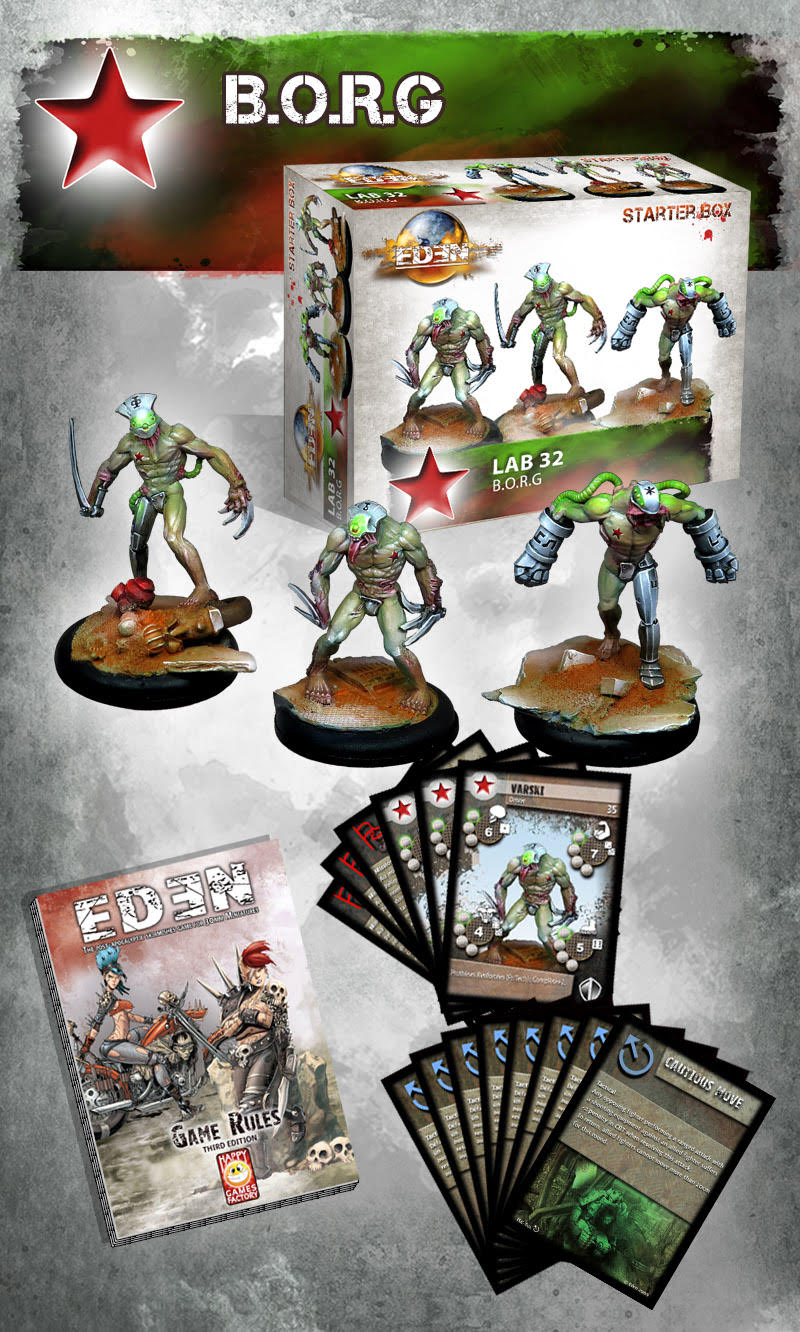 This Starter is our New Limited Edition Starter ! It's a Game On Tabletop exclusive so don’t miss the opportunity to buy it! It provides everything you need to play a full 100 points team, the usual format!

This is the new faction : LAB 32 comes from Russia , from a L.A.B in wich they develop more and more strange creatures ! The basic gameplay is the same from some of our old I.S.C Models but with a totally new look and if this faction has a lot of success we will continue to devellop this aspect of the universe.

This pledge comes with all unlocked stretch goals. 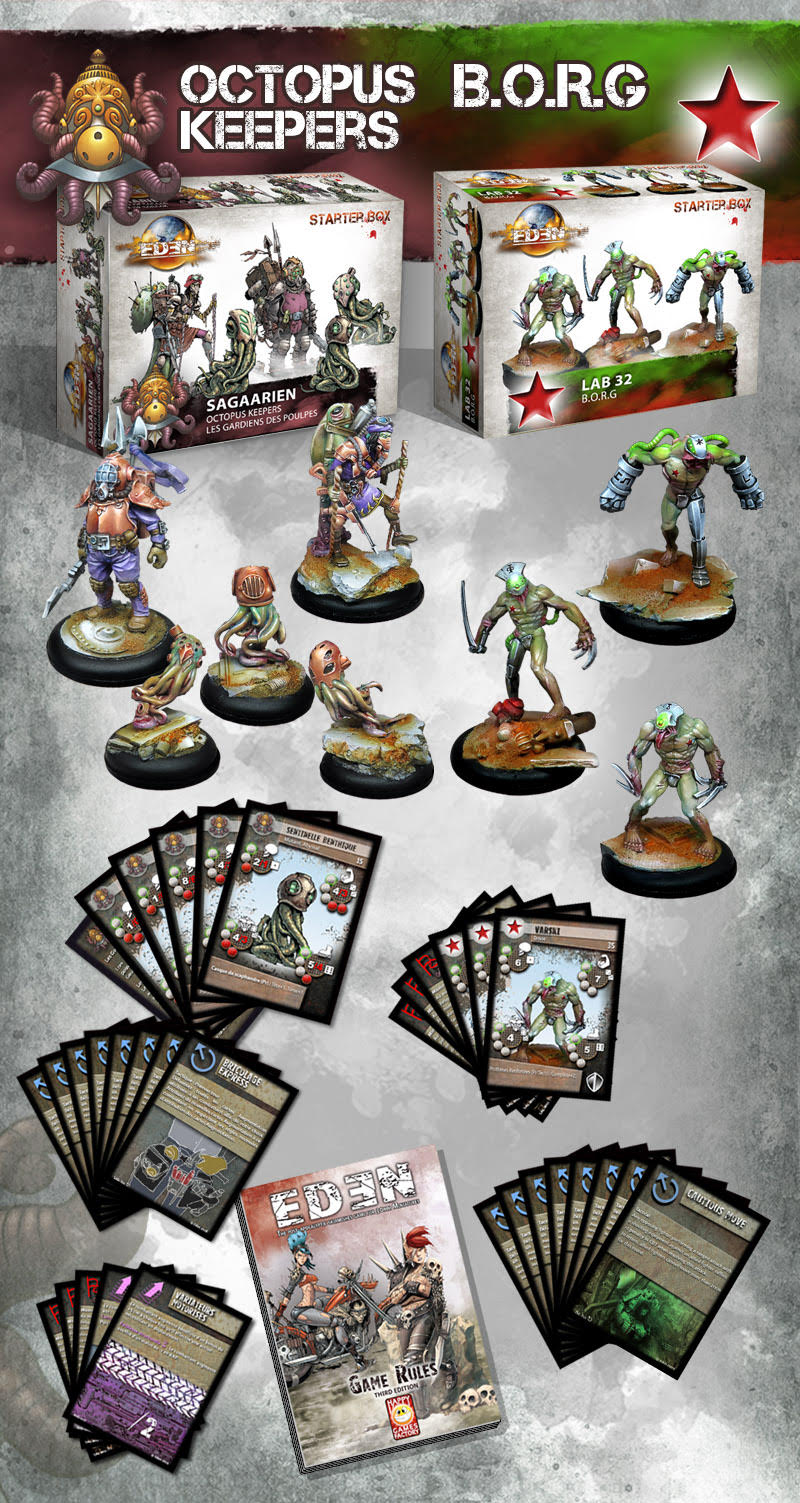 The perfect way to start the game with a friend! You have all you need to play 100pts for each side and 2 copy of the rules booklet . You will receive in each starter 3 Missions and 8 Tactical cards to play Eden.
This pledge gives you 2 copies of all unlocked stretch goals. 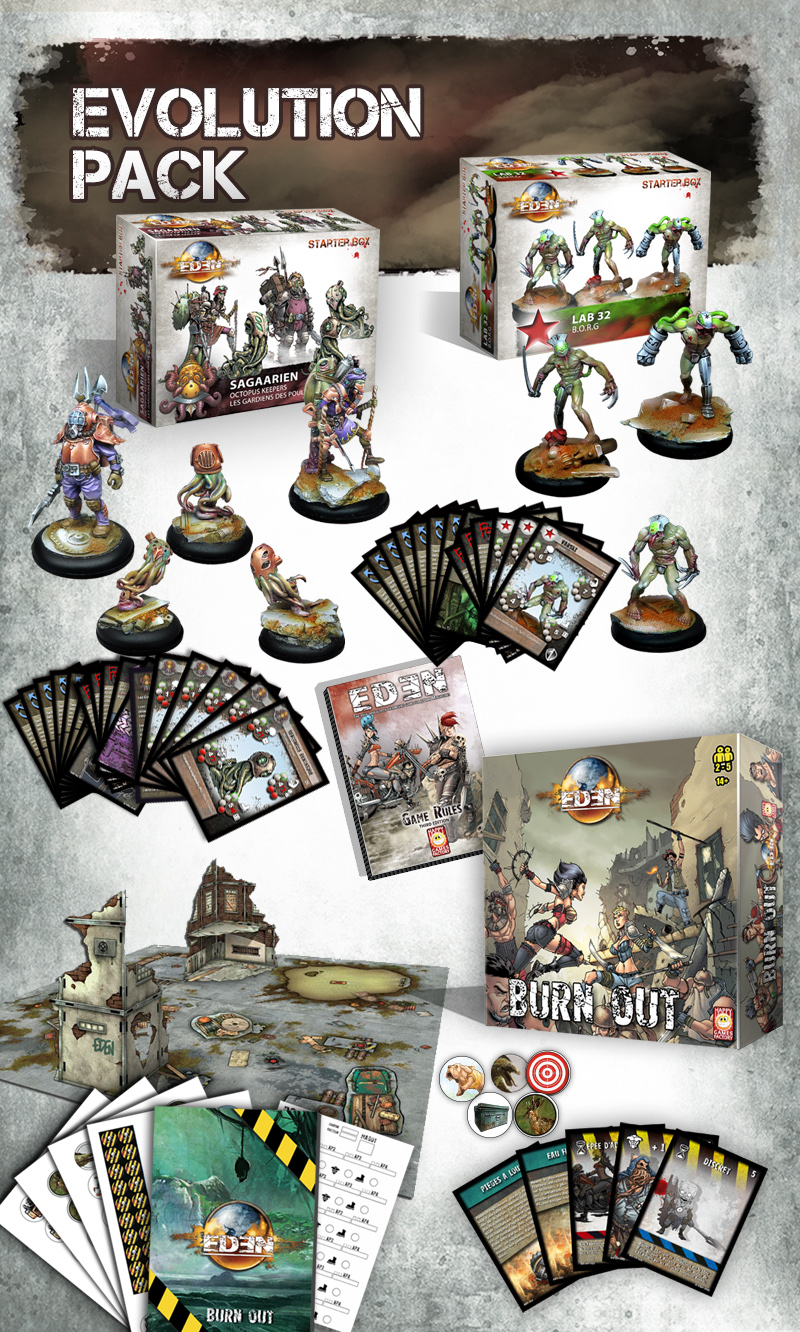 The Evolution pack : Sagaarians VS LAB 32 and BURN OUT.

With this pack, you have all you need to play 100 pts for each side AND all the necessary to extend your experience with the campaign extension Burn-Out. 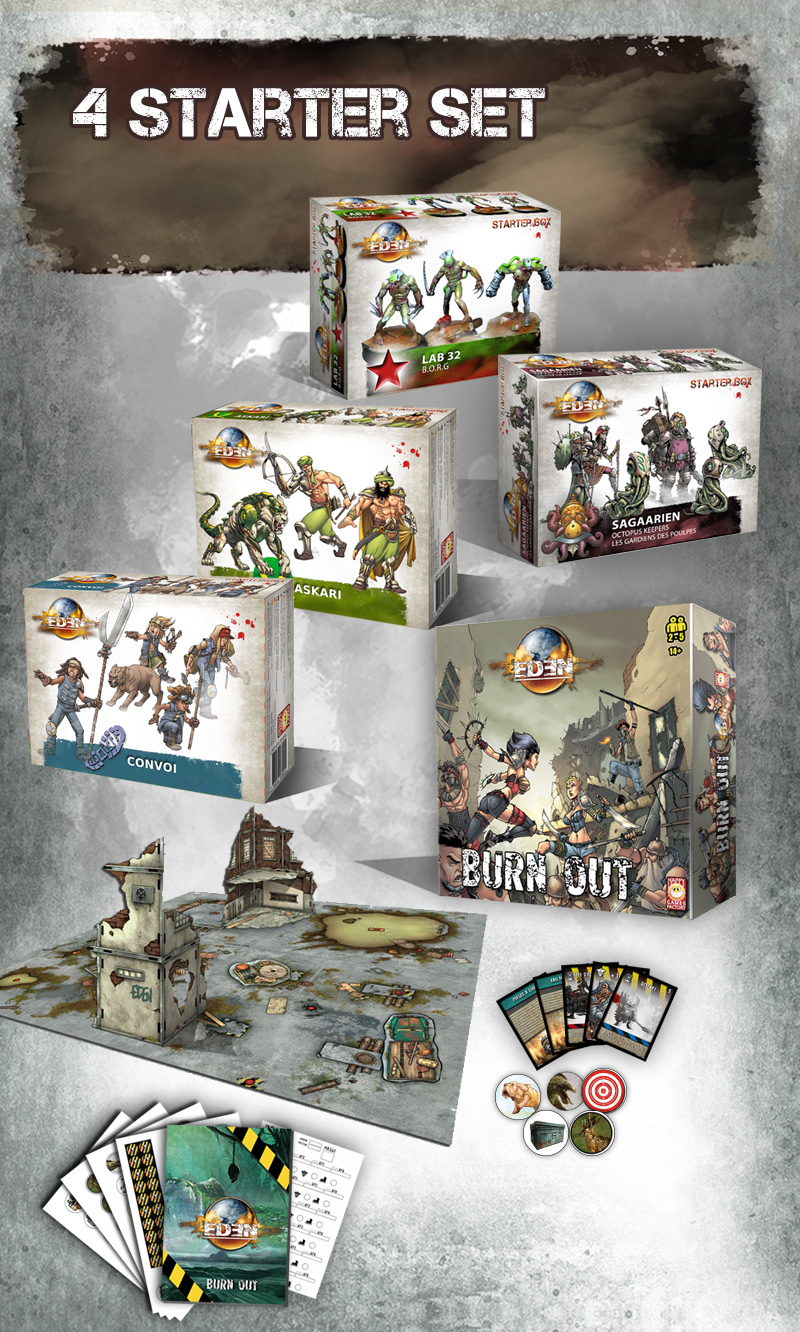 4 starters set : Sagaarians VS LAB 32 VS The Convoy Kids VS The Askari Hunters

All you need to play a Burn Out campaign a game after an other for 4 players. The 2 news starters are joigned in the battle by the Convoy kids and the Askari Hunters.

This pledge gives you 2 copies of all unlocked stretch goals.

Askaris hunters, led by the terrifying janissary Hassan, are an elite group specialized in stalking and catching new specimens to provide secret labs. Equipped with a crossbow, the Wanashab is cold blood killer. Next to him is the Sharir, a dreadful cybernetic tiger, an outstanding hunter who is letting a considerable threat in the hearts of his prey.

Symbol of hope in a new world or sign of the decadence of a people: the kids take up arms and fight in the name of the Convoy! Do not be fooled by their age and do not underestimate them! These kids have lived the hard way from their youngest years and are able to drool over to more than one mutant! Led by Hans and his legendary temper, children are already respectable warriors. Willi is a mischievous saboteur, while Ralf keeps silent under all circumstances. Finally, Tillo and his formidable dog Wulf play with their targets, between harassment and direct attack.

Eden has never needed a Kickstarter in the past, so why now? The habits of the players are changing and Eden needs to be exported, these are the two fundamental reasons.

The team needs resources and to show that Eden is still reaching its audience and is able to seduce overseas players, attract distributors and expand a little more! Eden offers a very elaborate game system allowing casual play and to easily set up tournaments. It's an ideal entry into the hobby for the youngest as well as the oldest of us, so it's time to share it with our favorite players! 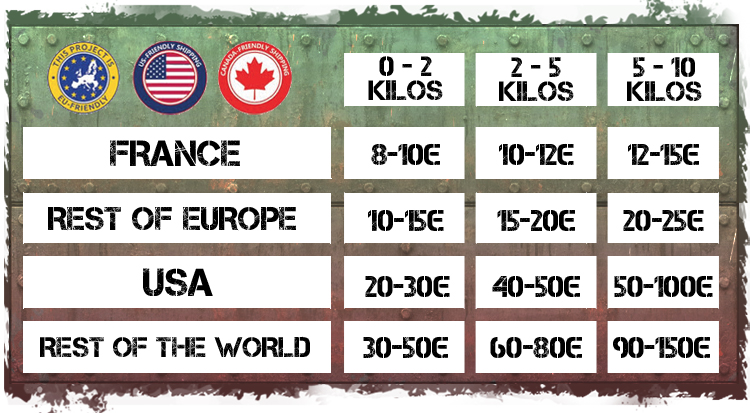 The production of these resin kits is done directly in our workshop. We're ready for the first 100 copies and we'll be able to quickly produce the requested copies on our premises. This method will allow us to better manage our stocks and avoid over-stocking our products and our creations!

Julie joined the team for three years already. She likes to create and develop, with its graphic tablet asa well as its brush! New in the board game, she keeps learning and evolving within the team, bringing her own personality in the adventure!

Painter and sculptor for more than 10 years, I have always loved playing and imagining games! Surrounded by a wonderful team I am always looking forward to start new projects with hope and joy in my heart.

Pierre Joanne is the joyfull game designer of its post-apocalyptic child: Eden, a game he developped since the very beginning. From background to rules, Pierre touches several faces of this game and is specifficaly in charge, monthes after monthes, of creating new profiles (with a great team of beta-testers, many thanks to them!). Pierre is also a boardgames fan and wants to merge the specific gameplay of eurogames with the tactical potential of the best miniature games.

Sex appeal of the team, Yohann joined us for the first time for the Essen Spiel show in Germany and has not left us since. He quickly showed his skills as a prototype creator and is doing great work on the classic production on our monthly Eden releases. Of course, he wonderfully managed all the resin prototypes of the game and provided us all the feedback we needed for the final production.

I have been an enthusiast of boards and miniatures games since I was a kid. With a professional background of 10 years in Industry I decided to use this experience in the games edition. I would not choose an other project that the exciting game of Arena Bot. And to work on it, it is with enjoyment that I join the team of Happy Game Factory ! Now we just need to share this passion with you.

I'm fond of board games, miniatures, and usually when I'm not playing, I'm writing on the subject. My role here is to communicate with you and help the game to become more and better known.

Julien enormously progressed these last years! Further to his(its) regular comments on the community page Eden the game worldwide, he was contacted by the team to propose studio version of our Eden releases.

With lots of motivation and dynamism, Julien gives the best of himself in every painting and we are proud to consider him as one of our freelance pro painters!

Julien is a French author born April 25, 1974. His career is that of a passionate designer, self-taught who chose drawing as a profession. As a teenager he is interested in comics through French translations of Marvel’s superheroes (Strange). Later with Franco-Belgian comics such as »la quête de l’oiseau du temps" and « Aquablue" which have definitely given him the envy to make comics. In 2007, for the first time, he was professionally edited with the futuristic thriller "Dreamers Rebirth". Will follow the publication of a dozen album in various and varied themes.More recently he joined the bookstore team « Tribulles » (Mulhouse).

Full member, he ensures the graphic and visual part of the store through its logos, visuals or weekly strips that completed the newsletter from 2012 to 2017.

This is our 9th crowd funding campaign. All our our previous project have been delivered or are about to be.

Most of this project, including stretchgoals, have already been created and tested.

Our company already has a big experience in publishing and producing metal, plastic or resin miniatures.
We will build on all our relations to run this project. 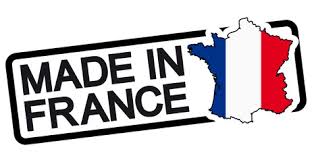 The resin prototypes for all the miniatures proposed in this campaign have already been made, or are being made at the moment.
We will thus be able to start the production for these elements within a short time frame in France, in our Workshop.

Our experience with the many news waves of Eden is a good guarantee of our expertise. In order to ensure the deadlines are met.

All miniatures will be produced in resin, and all the sculptures are already done .

For this Project, we choose Game on Tabletop to manage the pledge manager. This way, it is simplify the process for you and the team.

We also choose to work with our historic partner Expedipro with whom we inproved a lot the managament of the carrier issue.

17 comments on this project

This project has unlocked 11 Level Up's!