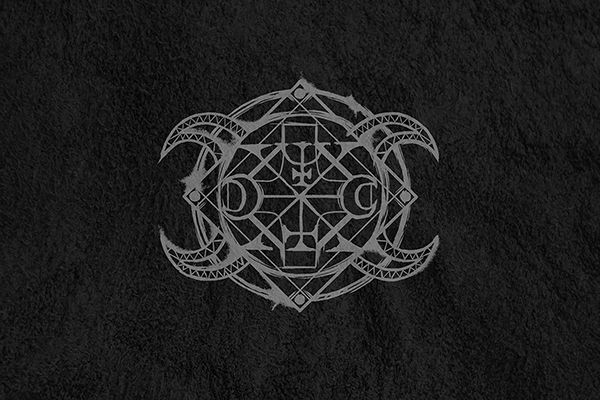 The Complete Book of Illustrated Necromancy

This is a Complete Illustrated Book of NECROMANCY spells for 5e.

100 pages complete with a personal grimoire in the back for your homebrew spells to personalize your spellbook.

I will be illustrating ALL 8 schools of magic, this happens to be the first.

This beautifully illustrated spellbook comes in PDF, Softcover, and Hardcover forms. There is an add on as well for the FALSE LIFE T Shirt (U.S. sizes) Images below. 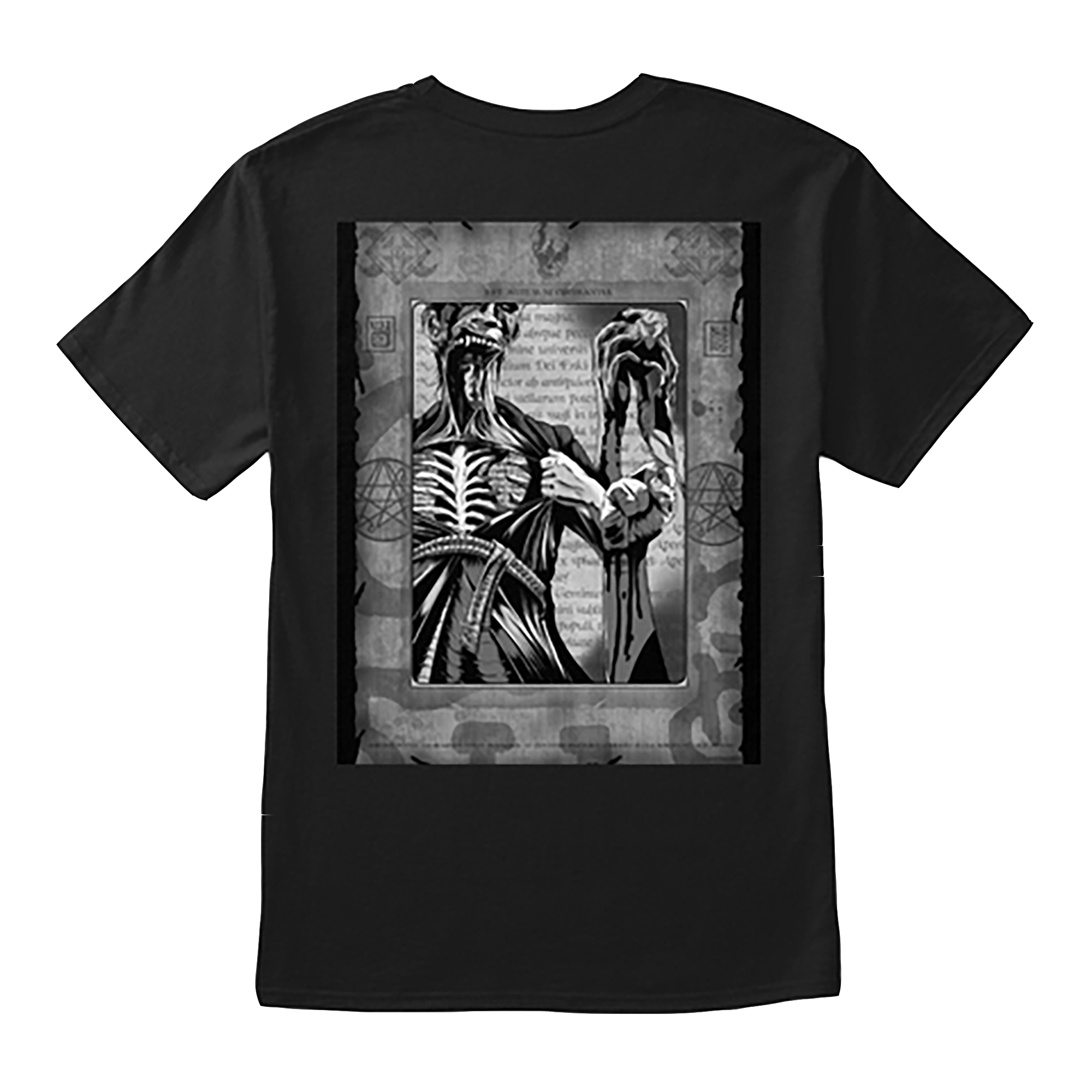 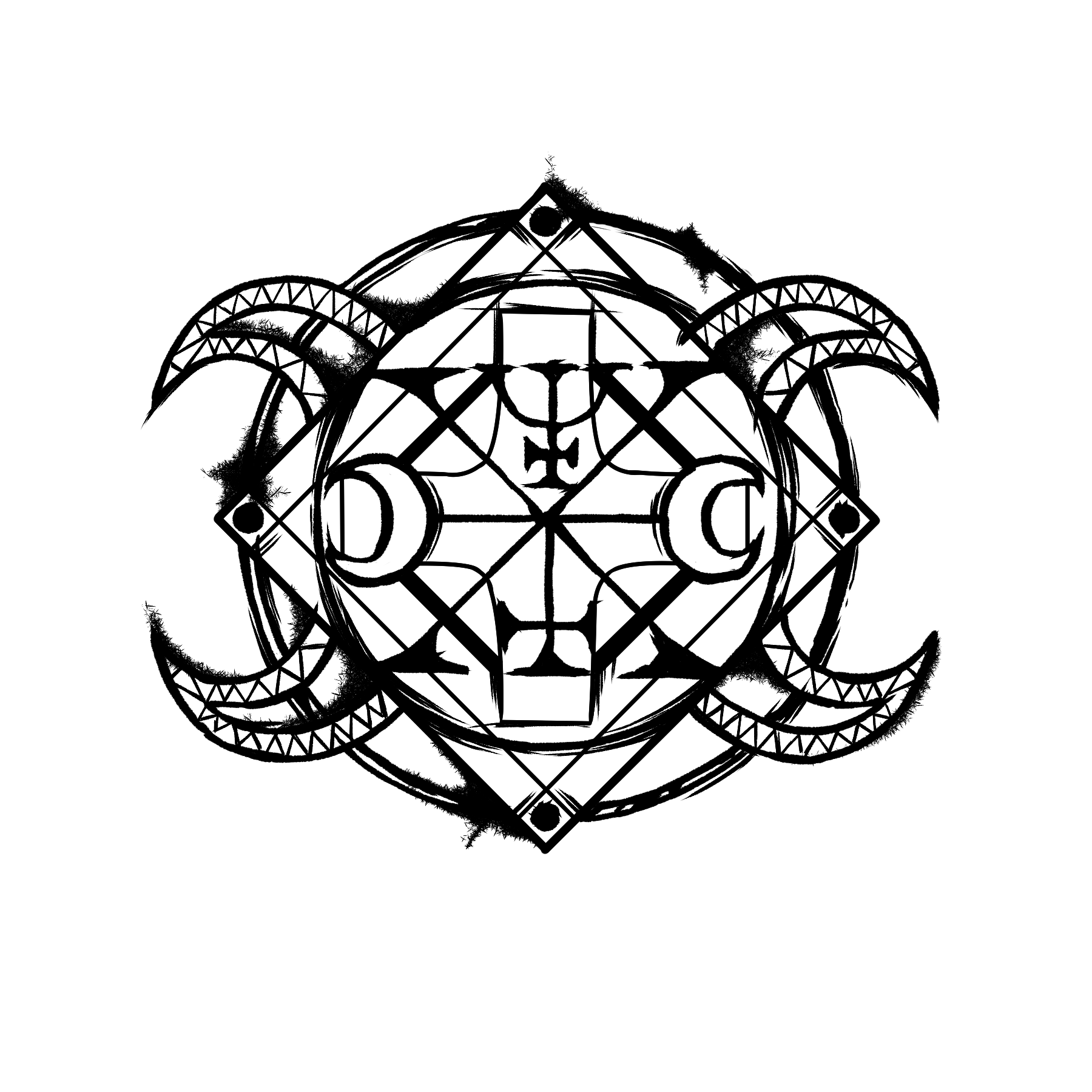 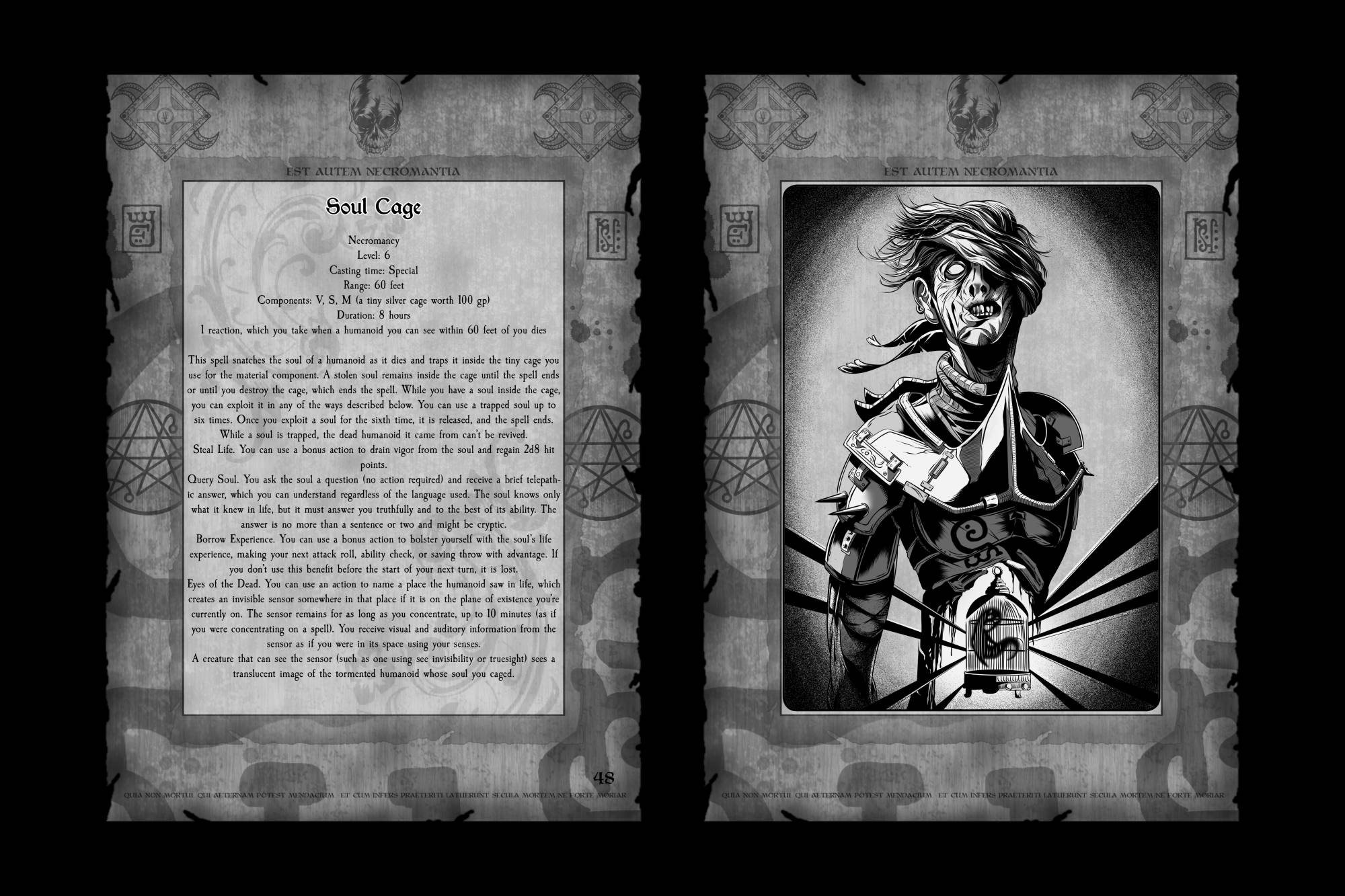 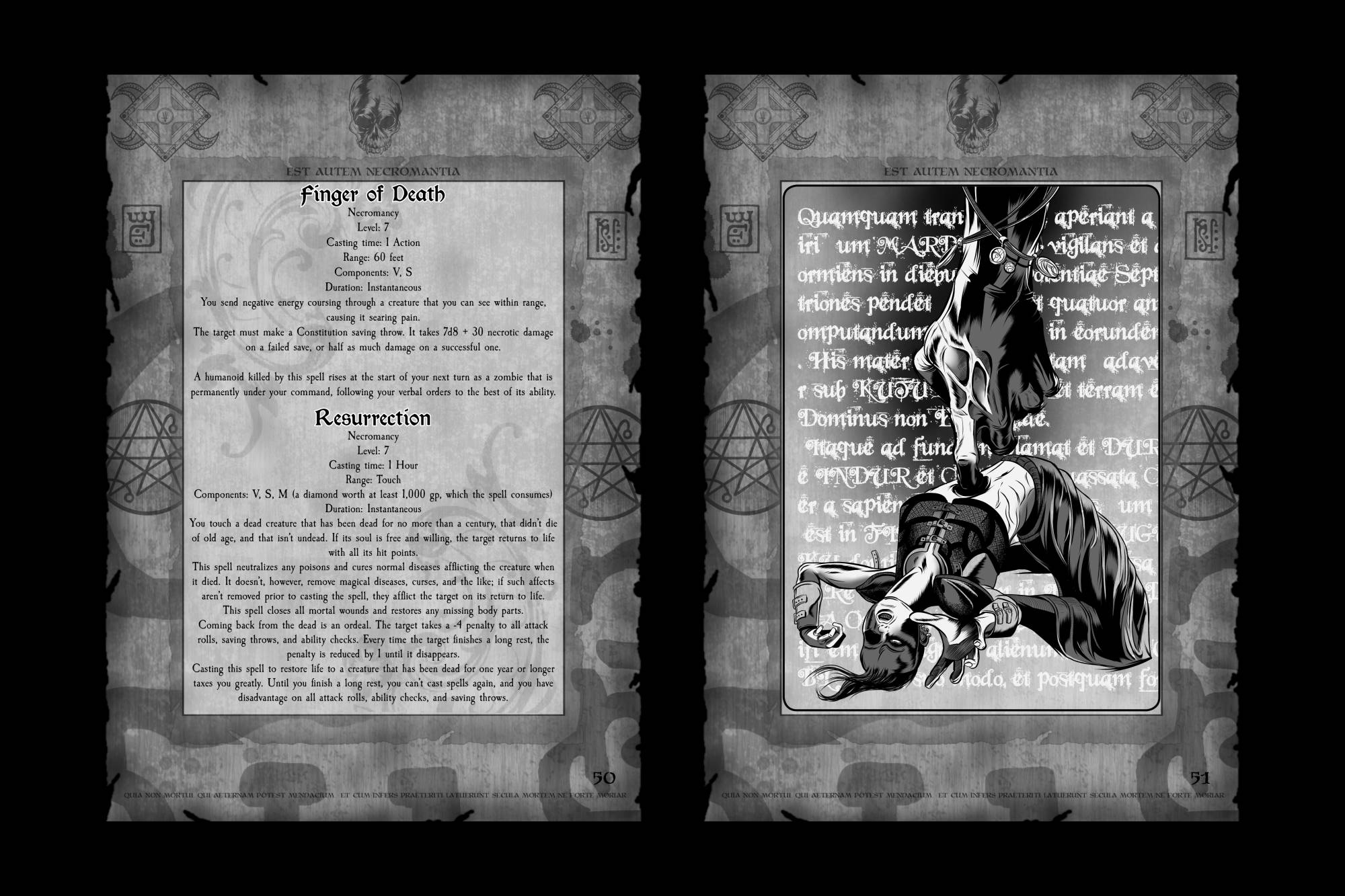 A small forward on how this book has gotten into your hands.

Mention the name Lire Goest to any stranger inhabiting the town of Eastbourne, and you will be met with a leering eye of distrust and loathing. It is a name only uttered off drunken lips and only then in the deepest recesses of dimly lit corners of the local taverns. The name Lire Goest if spoken at night, will give one gooseflesh, the kind one would get if someone stepped absentmindedly over a grave. Or if mentioned during the day in passing conversation, would cause one to stop abruptly and divert their eyes downward to ask the gods for forgiveness.

I first heard the name Lire Goest while on one of my excursions just South of the towne of Eastbourne. I was at a tavern late one night with my maps deciding the best route to take to my final destination. Where I was heading is of no use to this story of course, the name of that particular place was removed altogether from my head the moment I learned of the Necromancer Lire Goest whom resided to the North. 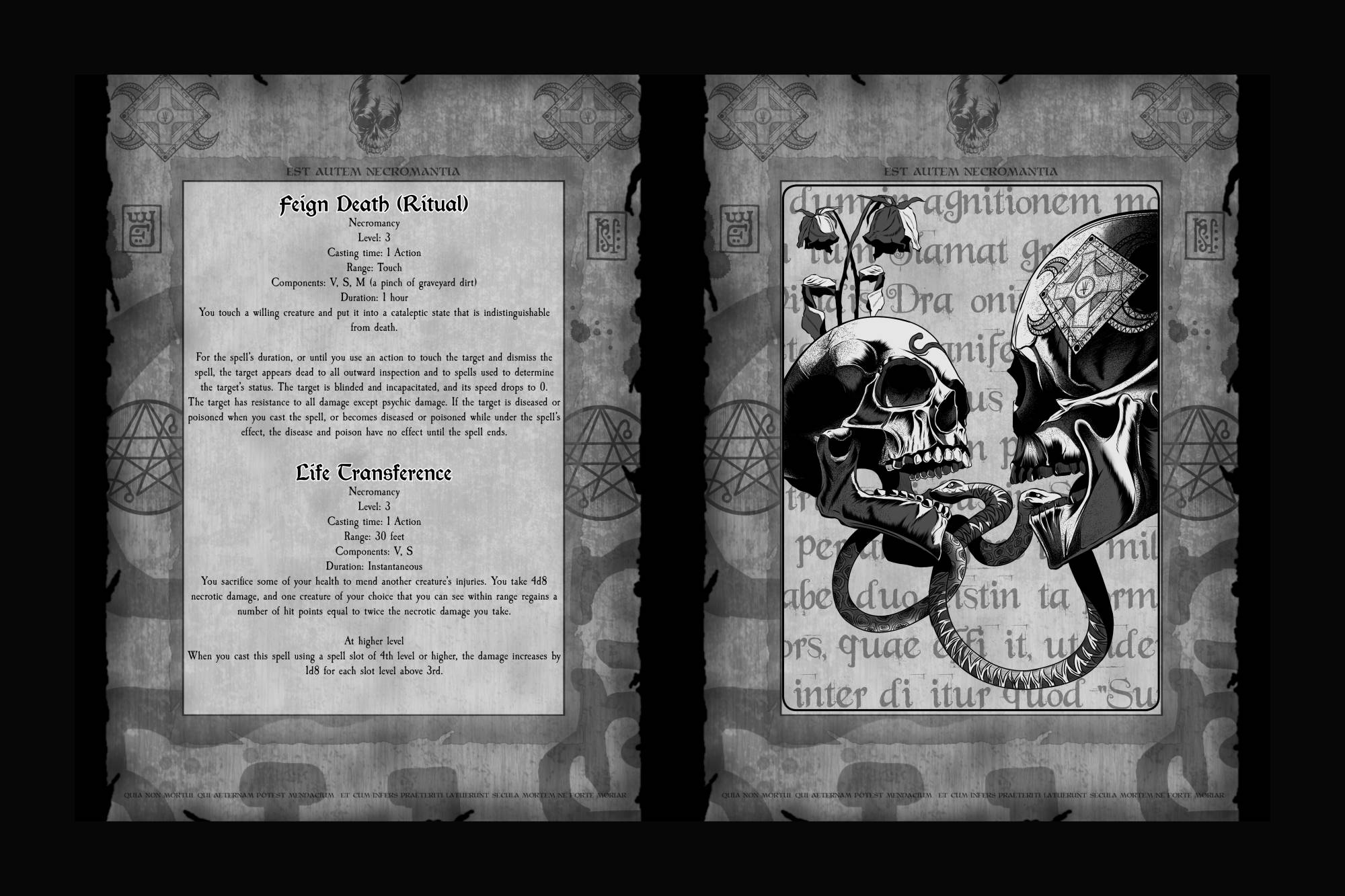 The man I was speaking to at my small wooden table had a miasma of cheap wine on his breath. It wafted off his clacking tongue from time to time with the utterance of certain vowels during his speech. How he came to join me at my solitary table was by sheer circumstance.

Randolph Beaubien was his name, and from the sight of his appearance, it looked as though old Randolph had been at this tavern drinking for a week. I placated his insistence that he join me for a drink, I needed a break from my studies of the landscape anyway. Randolph started as any local drunk would when sitting down with a foreigner for the first time. The history of the town, what the tavern we were sitting in used to be, and so on and so forth. But when it was revealed to Randolph that I was a dealer in antiquities, and specialized in the kind that dealt with the practice of alchemy and magic, his tone turned somewhat excited.

Mr. Beaubien was a wanderer of sorts as he explained to me. His wandering feet claimed to own the land unto which they travelled, everyone else was just a visitor in his eyes. He had watched first hand outlying towns grow with an immigrating populace, peoples who really had no roots in the places that they settled. He claimed to be the only true local, and that the towns owed him that, most likely in cheap wine, free of charge of course. There was only one other local that could make the claim that he had, and the was Lire Goest.

There was a castle in Eastbourne upon a hill, albeit small according to Randolph, but a castle no less. In that castle resided a Necromancer by the name of Lire Goest. Beubien ordered another wine at this point of his story and kept his head low to the table as if to make himself invisible. He claimed that there were “ghoulies” in the walls that could hear a man’s words. One had to whisper when talking about their master. Evidently these “ghoulies” had very poor hearing abilities.

According to the account given to me, Lire Goest resided in a castle in which no “local” could ever remember being built. He would be seen at times in the market buying strange an unconnected items of food and odd trinkets of no worth to the average citizen. The only ones who knew his name were the merchants since some of the items had to be ordered or shipped in, which required a signature of course. Lire had a flourishing signature, that of a nobleman or aristocrat. It stood out, and the mystery created gossip amongst the shop keepers, which eventually trickled down in to the common inhabitants of Eastbourne.

Some of the merchants attempted small conversations with him as they were preparing his order, but nothing fruitful came of it. Goest was a quiet man, garbed in deep robes, even in the warmer seasons. Other than the market Randolph continued, Lire was nowhere to be seen, and the rumors grew in the taverns amongst wagging tongues of bored men and women. It was common ground for idle conversations, just as one would talk about the weather with a total stranger. Lire Goest, the strange man from the marketplace.

And then the body was discovered. A putrid, rotted corpse lay at the middle of the hill before the castle. It was discovered by two boys playing outside of the area that was deemed safe by their parents. They ran back to town and told the nearest resident who gathered a few more men to investigate the finding.

Sure enough as Randolph continued, there was a body for sure. The decay was so severe, it was almost as if someone had dug up an old corpse and tossed it hundreds of feet down the hill and let it roll. Bits of grass and dirt had been accumulated on the body, fresh dirt and grass. Immediately the small band of townsfolk headed to the town to gather more participants to create a small mob. Randolph was one of those collected to confront the resident of the small castle.

When the pounding on the large wooden double door to the castle proved to be fruitless, strength and violence took over the mob. They burst through the door and stormed the castle. Randolph at this point was frothing a bit at the mouth, I could tell that this was his favorite part of the story. He had always wanted to storm a castle, and he had gotten his chance.

The mob flooded every room in search of Lire Goest. It wasn’t until they reached a tower on the North side that they found his body, and the bodies of others as well. Lire was lying face down in the middle of a hand drawn circle on the flagstone flooring. Surrounding him were bodies in various stages of decomposition. Each with their arms outstretched toward the circle. The circle was encompassed with various symbols and etchings that no one could decipher, or wanted to. The room in the tower was cluttered with objects of curiosity and wonder. The majority of these items were foreign in nature.

Randolph described the silence of the mob to be almost as terrible as the scene before them. Some saw their relatives strewn about the floor, naked and deformed, reaching in anguish towards the body of Lire. Some of the townspeople wretched at the sight and left immediately, others stood gaping in amazement of the scene, trying to put together in their minds what had happened in this terrible room. But Randolph had other ideas as a long smile crept across his face. There were things of value for sure in this room, and could be fetched at a nice price too. It would be a shame if what had happened here went for naught and nothing come about of it.

Randolph told me of the lectern next to the circle. On it was an old book that stood out to his wandering eyes in search of the most valuable thing. He claimed it had the most worth because it was not lumped all together with the other items, no, this book was special. It had been singled out on the stand as something of importance to Lire. Something he had used often by the looks of it. And so, as the remainder of the residents stood idly by not noticing, Randolph stole the book and placed it under his shirt.

The rest of the tale he told me is of no use. The people left and boarded up the castle, his name was never to be mentioned again. Eventually it was burned by the local clergy, but the rock and mortar shell still stands as a reminder to all of what horrors had occurred there.

It was at this point of the story that Randolph produced the book and gently slid it towards my hands on the table. Where he had it the whole time I will never know, but there it was at my fingertips. There was a price attached of course, and Randolph allowed me to savor the moment first before letting me know it.

I paid it of course, which is why you are holding it now in your hands. Myself and a few handpicked scribes copied the original hundreds of times, knowing that if anyone were to find the original, they would burn it. This book could not leave this world, it had to be preserved. It is every spell that the Necromancer Lire Goest painstakingly scribed and illustrated in his own hand to create the work that he had done for years in that castle on the hill of Eastbourne.

Be warned though reader, to practice this type of necromancy could cause harm to you and to others. Keep it in a safe place, memorize the work herein, and go forth in life with it on the tip of your tongue for both protection and defense.

A complete illustrated book of Necromancy spells for 5e